It has been nearly a month since my last Tweets of the Week. A month!?! Wow. It has been a busy summer, that’s for sure! And it’s only about to get busier for this moonlighting writer/blogger because child number two will be welcomed into the world in the next few weeks. Feel free to get excited for me! (Or tired for me, whichever you prefer.)

I hope you found time to read or write this week. I had a very eventful week myself. My book finally made it from the ebook world into the world of print! I was excited by the news. Almost immediately, though, Amazon removed 55 of my reader reviews. None of them were bought, traded, coerced, or from friends. You can imagine my frustration and disappointment while also being excited about my book being in print.

So let’s begin this week’s installment of Tweets of the Week with my own tweet from this morning:

I reach out to anyone that wrote a review. It's called #gratitude #kindness. So your algorithm deletes them?@amazon pic.twitter.com/ylwS1yzMnJ

I will keep you all apprised of how (or whether) this gets resolved. I fully understand Amazon’s interest in keeping reviews honest and independent, but it’s kind of silly to expect authors this day in age not to engage their readers. Hell, even Stephen King is actively engaging his readers on social media these days. I’m sure I’ll write more about it next week.

So enough about me…

Lessons I Learned from Being a Father https://t.co/3IVPjKqRBb #Fatherhood pic.twitter.com/1Nqu2tlvIh

Maybe I like this tweet just because I’m about to have another child. Maybe I like it because my own father is a firm believer that a man’s highest goals in life should be being a father and a husband (if you are a father or a husband). Maybe it’s just because @DiversityDad reached out to me on twitter and his exuberance for being a father is admirable and contagious. Whatever the reason, I enjoyed this tweet.

This is my own repost on Facebook. You probably didn’t even catch it. I didn’t. Read it again.

Well, writer friend Assaph Mehr did and let me hear it! 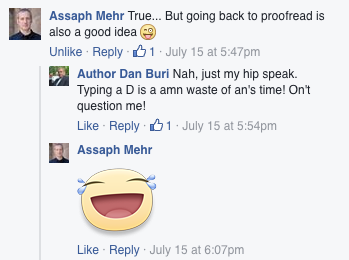 Dammit! At least I had a quick-witted response back to him. I’m a writer. I never said I was a proofreader!

I can’t like this one enough. Thank you Chuck Emerson.


I don’t think this needs any commentary.

And we’re back to where we began. This is from a few weeks ago, but clearly it’s on my mind again today. Oh Amazon, the 10,000 foot gorilla with obscure algorithms and review removal policies. Sigh.

Keep writing away friends! Have a wonderful weekend.