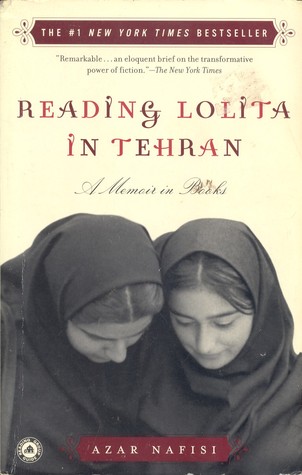 I have yet to allow someone else to take over my Sticky Book series on Wednesdays. After all, these are books that have stuck with me for a long time after reading. But when longtime Nothing Any Good friend Victor Davis excitedly inquired whether he could introduce a Sticky Book to my readers, I couldn’t deny that kind of excitement. Victor has contributed a very well regarded WordPress for Authors series, so it was the least I could do to offer the coveted Sticky Books spot to a guest. I have not read this book, but rest assured it is now on my list. – Dan Buri

Her career carried her to several different universities with the winds of social change and various states of liberal education. During some of those darker times when books were banned, liberal universities were letting “western” professors go, and the regime was cracking down on un-Islamic teachings and culture, Nafisi ran a secret book club out of her living room. She eventually emigrated to the U.S. and wrote this memoir.

Any book lover will immediately be drawn to the idea of a secret book club, held in the shadows of a book-banning regime. Nafisi goes so much deeper than this surface theme. She professorially analyzes four books and tells different parts of her story with each book’s theme in mind: Lolita, The Great Gatsby, Henry James, and Jane Austen. The overall lesson then is how relevant these western writers’ experiences and messages were to the founding of modern Iran and the oppression it has become known for. Here are some selected quotes and passages.

“Do not, under any circumstances, belittle a work of fiction by trying to turn it into a carbon copy of real life. What we search for in fiction is not so much reality but the epiphany of truth.”

“It is only through empty rituals that brutality becomes possible.”

“Curiosity is insubordination in its purest form.”

“Is it possible to write a reverent novel and have it be good?”

“A stern ayatollah, a blind and improbable philosopher-king, had decided to impose his dream on a country and a people and to re-create us all in his own myopic vision.”

“Now that all this was illegal, I felt light and fictional.”

“Whoever fights monsters should see to it that in the process he does not become a monster. And when you look long into an abyss, the abyss also looks into you.” ~Friedrich Nietzsche

“The war has used up words; they have weakened, they have deteriorated like motor car tires; they have, like millions of other things, been more over-strained and knocked about and voided of the happy semblance during the last six months than in all the long ages before, and we are now confronted with a depreciation of all our terms, or, otherwise speaking, with a loss of expression through increase of limpness, that may well make us wonder what ghosts will be left to walk.” ~Henry James, 1915

“[Henry James] was aware, as many were not, of the toll such cruelty takes on emotions and of the resistance to compassion that such events engender. In fact, this insensitivity becomes a way of survival. As in his novels, he insisted on the most important of all human attributes – feeling – and railed against ‘the paralysis of my own powers to do anything but increasingly and inordinately feel.’ ”

“I know these people better than you; they change their words more often than their clothes. Islam has become a business, like oil for Texaco. These people who deal in Islam – each one tries to package it better than the next. And we are stuck without them. You don’t think they’d ever admit that we could live better without oil, do you? Can they say Islam is not needed for good government? No, but the reformers are shrewder; they will give you the oil a little cheaper, and promise to make it cleaner.”