It’s been awhile since we’ve had an edition of Writing Advice from Famous Authors. This time, it’s not just one author, but many bestselling authors speaking on a panel at SLCC (Salt Lake Comic Con). Let’s jump right into it with Frank Bedder, Platte F. Clark, James Dasher, Michael Jensen, Shannon Messenger, Jennifer Nielsen, and James A. Owen.

“Go out and find your favorite book…that book that you were reading over and over again, the book that made you want to become a writer, get a fresh copy of that book and highlight every single scene that you love… Ask yourself why does this work?”

“I wrote [my book] thinking ‘I’m just going to write what I think will be funny for me to read to my kids.’ …That served me the best because I wasn’t true to anything other than my own voice and what I wanted to do.”

The hardest and most necessary thing for an author to do, especially one that’s just starting out, is to find his voice. It takes painstaking work and it takes constant vigilance. Like Clark says here, you need to be true to your voice or the reader is going to see right through you.

“When I’m writing and I’m into it and I have a really good scene, I don’t ever finish it. I put it down at the end of the day so the next morning when I start writing again I know exactly what I’m going to start writing.”

I’ve never heard this advice before, but I think it’s a brilliant trick. How many times have you been so excited about a scene that you wrote and wrote and wrote well into the night? It’s amazing when it happens, right? But what about the next morning? It was hard to find that same vigor wasn’t it? Beddor’s advice gives you the perfect place to start your writing day when this happens. Most likely, it will give you renewed energy and excitement when you jump back into that scene the next morning too.

“Finish what you start.”

If it’s been said once, it’s been said a thousand times. The best trait a writer can have is perseverance. Don’t quit. Don’t write just half a book. Don’t write just a chapter. Finish what you start. Owen goes on to say, “No one ever writes a great book. You write a book that you can fix.” His point is that you can’t fix an unfinished book. You can’t get editor and reader feedback on an incomplete work. Finish what you start!

There’s some great tips from the other authors in there as well. Like Shannon Messenger’s reminder that if you’re writing YA, the kids need to be the heroes, not the adults. Or James Dashner’s advice that the characters in your stories are more important than anything else.

I apologize for my absence the last week, friends. Turns out I got quite sick. Still trying to dig out of it. I got the flu (non-stomach virus), with full on body aches and a high fever. Not fun, right? Well, the day after my fever broke and I thought on was turning the corner, I woke up unable to swallow at all. Surprise! Strep throat! Well, all of us writers know that comedy and tragedy must come in 3s and 5s, so we can’t just end with flu and strep. Yesterday my doctor told me over the phone that I probably have an upper respiratory infection as well. Ding! Ding! Ding! We have the trifecta!

I’m not sure if I had/have all three of those or just a combination of two, but let me tell you, I really don’t care. I just want to be done with it.

Anyway, that’s the reason for my absence. I apologize.

But I have good news for you!

If you have been wanting to get Pieces Like Pottery and just thought that $5.00 for mocha and $4.99 for a whole book was just too much to spend, well you’re right. Stop spending so much on coffee! You could be saving for your retirement! You don’t need that much sugar! Caffeine? Yes. Sugar? No!

You’re in luck, though, because Pieces Like Pottery is on sale this week! Just $0.99 cents!

About a year ago my book reached bestseller status on Amazon. I was delighted and honored and humbled. In return, to celebrate that anniversary I decided to put it on sale as a thank you to all my supporters. Thank you!

I did not expect it at all, but I logged on this morning only to find this: 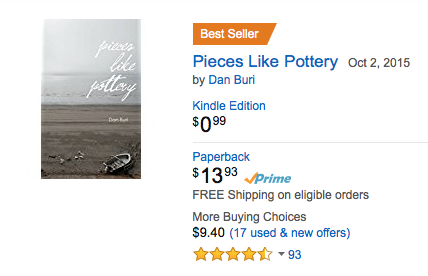 We’re back, friends! Wow! Thank you for your support. I’m honored and touched.

Since this is Holy Week and my book explores the themes of the Five Sorrowful Mysteries, I figured what better time than now to basically give it away to readers. This is a great week to do some heartfelt reading and some reflection on what it means for us to be human.

So, if you’ve been waiting to buy it, now’s your chance. Get a copy for yourself! Gift one to your friend! You can currently get 5 books for the normal price of 1. Don’t miss out!

And if you prefer print copies, worry not! I am discounting my print book 33% off the $15 cover price this week for anyone that wants a signed print version. Simply send me an email at danburi777 {at} gmail {dot} com.

If you’ve been waiting to get it, don’t sleep! Now’s your chance!

How Does an Indie Author Become a New York Times Bestseller?

The New York Times Bestseller list. The crown jewel for every author. Even more important than Oprah’s Book Club, which is an author’s dream in its own right. (Well, unless you’re Jonathan Franzen and don’t want to damage your place in the ”the high-art literary tradition.” Only the greatest authors can be so obtuse about their written works, right Jean-Paul Sartre?)

NYT Bestsellers see a huge uptick in sales, both in the immediate and for the foreseeable future. Being able to slap that label of “New York Times Bestselling Author of…” is the gift that keeps on giving.

So how in the world do you get on that list? It’s just the books that have sold the most copies, right? Wrong.

The NYT editors handpick the books that make the list. The number of copies sold is considered as a factor, but is not the final driving force. The New York Times editors are. Here’s how they describe their methodology:

Rankings reflect unit sales reported on a confidential basis by vendors offering a wide range of general interest titles. Every week, thousands of diverse selling locations report their actual sales on hundreds of thousands of individual titles. The panel of reporting retailers is comprehensive and reflects sales in stores of all sizes and demographics across the United States. The sales venues for print books include many hundreds of independent book retailers; national, regional and local chains; scores of online and multimedia entertainment retailers; supermarkets, university, gift and big-box department stores; and newsstands. E-book rankings reflect sales from leading online vendors of e-books in a variety of popular e-reader formats.

It sounds an awful lot like they’re purely looking at sales, right? But in their 10-paragraph methodology description they’ve hidden phrases like “sales are statistically weighted” and “at the discretion of The New York Times Best-Seller List desk editors” and my personal favorite “proprietary vetting and audit protocols.” This, my friends, is what we in the intellectual property business call a trade secret. The Times tracks sales on a national basis, but in essence curates that list according to (if you’d like to give them the benefit of the doubt) proprietary standards and protocols. (If you’re cynical and don’t want to give them the benefit of the doubt, you would probably say they curate the list to fit the whims and fancies of the editors.)

This is how the Times runs into situations where hugely popular self-published author Autumn Kalquist believes they curated her book Fractured Era right off the list. According to Kalquist, “The New York Times ‘curates’ their list, and had snubbed self-published authors in the past. I was told it was possible they’d ‘curate’ me off the list no matter how much I’d sold.”

Kalquist goes on to explain that her book sold 20,000 copies and reached #16 on USA Today’s Bestseller List, but she didn’t find herself on the NYT Bestseller List. This confused and infuriated her, so she did some research of her own. She found that her book had outsold over 50% of the ebooks on the list and nearly 50% of the print books as well. Kalquist said her attempts to get an explanation by the Times were met with vague responses of the proprietary nature of how they go about making their selections.

The veracity of her statements aside, and I have no reason to question her statements and there’s anecdotal evidence from other authors that would support the notion that the NYT does do this to some titles, it’s hard enough for independent authors and small publishing houses to gain traction with readers. While we have help and hire consultants, we ultimately are the writer, editor, designer, publisher, distributor, and marketer. It’s a slog to say the least. We don’t need additional roadblocks put in the way.

Yes there are thousands, even millions, of self-published titles that are poorly written and edited giving a bad name to the entire genre. I understand that. This is the reason most book critics won’t review self-published titles and most literary awards rarely consider independent books. But it’s hard enough to find an audience as a self-published author. We don’t need Amazon offering preferred terms to certain traditionally published authors and the NYT Bestseller List skewing their proprietary “algorithm” against independent titles.

Times have changed NYT. It’s time to recognize your preference for the Big 5 Pulishers is outdated.

Times have changed @nytimes. It's time to recognize your preference for the Big 5 is outdated.Click To Tweet

We’re in this for the long haul, my friends.

A little bit of good news. (And I’m probably speaking out of turn here. Whoops.) I’m working with a few independent authors worldwide in an effort to support indie and self-published authors. Details forthcoming. Stay tuned.