Our next installment of Writing Advice from Famous Authors comes from the smart, witty, and hilarious John Hodgman. You may have seen Hodgman’s work on The Daily Show with Jon Stewart or heard his very funny podcast Judge John Hodgman. If you haven’t, then at the very least, you know him as PC in Apple’s “Get a Mac” advertising campaign back in in 2006. You have probably also seen his writing on countless shows and didn’t even know it.

In addition to television and podcast work, Hodgman has had stories featured in McSweeney’s, The Paris Review, One Story, and The New York Times. He currently has three books available: The Areas of My Expertise (2006), More Information Than You Require (2009), and That Is All (2012).

“People who keep submitting, and keep doing it, and keep making are statiscally much more likely to be successful than the people that are just merely super talented.'”

This advice is spot on. I recall a time about 10 years ago when a close friend of mine was worried about “making it” in his chosen profession. I explained to him that he has a huge leg up because he’s not crazy and he’s educated. That puts him at a huge advantage from the get go. Now just work harder than his peers and he’ll be just fine, which is even easier since many of our peer group seem to recoil from hard work.

Although I don’t think of myself as one, I’m right at that first year of where people say millennials begin. There are a lot of stereotypes about millennials, but stereotypes are stereotypes for a reason. I have found many 20-somethings and 30-somethings are afraid to put in the effort required day-in and day-out. That means if you are willing to do that work, you’re at a distinct advantage to be successful. Even if you’re an author in your 40s, 50s, 60s, or even 70s, you still have a distinct advantage if you’re willing to work harder and persevere longer than the next writer.

Hodgman’s advice here sounds strikingly similar to advice we heard from Ta-Nehisi Coates in our first Writing Advice from Famous Authors from last August where he voiced how much he believed writing is about perseverance. Keep working hard; keep writing. If you want to be a successful writer, work harder and write more. 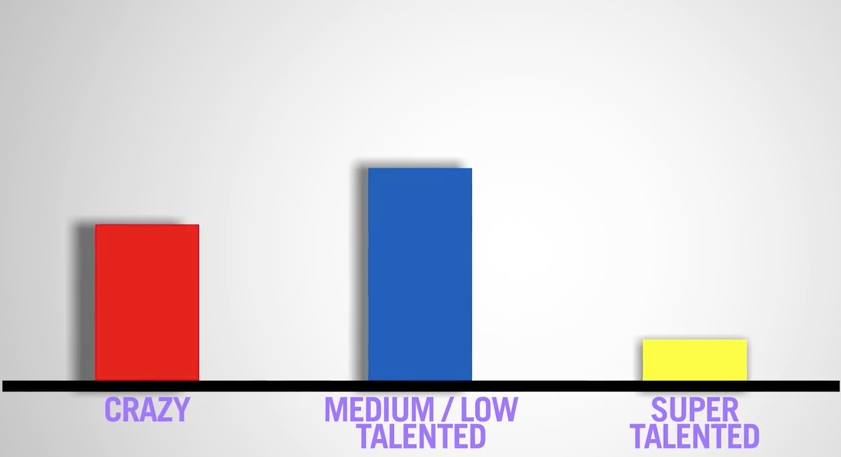 John Hodgman’s chart on how to be a successful writer.

You already have a leg up on the crazy people and most super talented people (the geniuses) won’t work as hard as you, that leaves you competing with the Medium to Low Talented people. Work harder and work more often than them.

“It’s not enough to write what you know. You have to know interesting things.”

This is a great line. On display with this line is some of Hodgman’s trademark wit. The truth contained within this sentence is that if you want to be a successful writer, you have to continue to experience life. No one wants to read about how you watched the latest episode of This is Us. That’s not interesting.

It's not enough to write what you know. You have to know interesting things. -John HodgmanClick To Tweet

“You also have to know what you know, and I think that’s even the hardest thing.”

I was really struck by this. It sounds obvious, but it’s in fact very complex. Most people don’t actually know what they think they know. They haven’t examined their experiences and their beliefs enough. As a writer, you need to really go to the heart of the matter and challenge those things that you know. That’s when the written word becomes interesting.

I am reminded of the famous line from Socrates at the trial for his life (from Plato’s Apology): “The unexamined life is not worth living.”

As writer’s, we have to examine everything, and then once we’ve finished examining them, challenge what we’ve come to know to be true.

“You have to know what it is that is driving you to do this completely narcissistic and asocial act of creating.”

This is another sentence that puts Hogdman’s wit and humor on display. There’s always truth in his comedy, though.

The comedy, in my mind, is labeling the writer as narcissistic and asocial. Any writer can identify with the humor in that.

The truth, however, is the need to understand what is driving you to write in the first place.

It doesn’t have to be only one thing, and it doesn’t have to be the exact same thing year-in and year-out, but you should always know what that thing that’s driving you is at any given point in time. If you don’t, you’ll become lost in your writing efforts. If you don’t know what’s driving you to write, you will fail to work harder than the next person and put your success in jeopardy.