If you’re like me, you constantly have to balance what time you spend marketing on social media with what time you spend writing—you know, that thing you actually love doing and wish you could do full time? Yeah, writing. This doesn’t even account for time with family, friends, hobbies, day jobs, or countless other things that quickly fill up your day.

The point is your time is limited. While social media can be beneficial as you build your author platform, it can also be a never-ending time-suck.

Here’s some advice on how to best utilize social media to build a solid Author platform. There’s a mantra I tell myself regularly: You can do anything. You can’t do everything. This is important to remember throughout life.

Managing your social media engagement is no different than other aspects of your life. Be selective on where you utilize social media. Each platform is different.

Twitter can help you reach new readers, while Facebook can drive more traffic to your website and create relationships with readers. Goodreads is wonderful for engaging with the indie author community. Instagram and Pinterest can help you build a brand, if that’s what you’re going for. This is just the tip of the iceberg of social media options.

Figure out what works best for you and focus on those one or two platforms. Personally, I mostly engage on Twitter and Facebook.

You can do anything. You can't do everything. Be selective on social media.Click To Tweet

People love pictures on social media. Images get exponentially more engagement than just words. This is the very reason Twitter started allowing images on their platform a few years ago. Their lunch was getting eaten by Facebook.

Spend the time necessary to create better images. One place to do that is Canva. That’s how I create many of the images I use on this site. (No, I don’t receive any kind of commission for referring you to them, but I should, huh? Somebody look into that for me.)

Don’t just scream for people to buy your book. Engage them. Learn about them and who they are. You’re likelihood of finding a new reader will be much, much higher. Answer questions. Respond to comments. And who knows, you might just find a new e-friend.

If you’re talking about someone in one of your posts, tag them so they’re aware. There’s a higher likelihood they’ll interact with the post or that some of their followers might as well.

However, DO NOT tag people just to tag them so they see your latest marketing message. One of the most annoying things on social media platforms is getting tagged by someone with no context on why you’re getting tagged other than they want you to buy something from them.

This may sound odd since the very nature of Twitter is already short quips, but just because they give you 140 characters doesn’t mean you have to use all 140. Try to keep your tweets short and simple. Around a 100 character max seems to be a good sweet spot.

As much as images and pictures get more interaction than simple text, videos do even more so. If you’re inclined to face your fear of being on camera, it can help your engagements on Social Media.

I realize most people have a fear of being on video. I do as well. Just because you have a fear of something, though, doesn’t mean you shouldn’t explore it further.

I’ve begun dabbling in videos with my content, both with photos I’ve taken and with being in front of the camera myself. I really enjoy the author and reader videos anaisbelieve creates on YouTube as well. Try creating a video yourself!

I’ll admit, I can be much better at this. People that tease the reader and pique their curiosity get more engagement and clicks. I’m not saying to use click-bait as a strategy. Everyone hates that and Facebook is even working to get rid of it where they can. I’m saying captivate your followers imagination with your posts. Give them a reason to think, laugh, or be moved. Put thought into your headlines.

Put thought into your headlines. Give people a reason to think, laugh, or be moved.Click To Tweet

Social media is a real quagmire of negative individuals, isn’t it? It’s obnoxious. If you’re not careful, you’ll find you’ve fallen into one of the two large cess pools that social media hosts: (1) The cess pool of Negative Nancies (or Negative Nates if you please); or (2) The cess pool of look at how wonderful my family / my vacation / my life is.

Don’t fall into those traps.

Reposting something from a few months ago is called Evergreen Content. Don’t be obnoxious and tweet the same thing out over and over and over again. But if you’re judicious, there’s a lot of fantastic content you’ve posted in the past. Don’t let it go to waste. One plugin I utilize for Nothing Any Good is “Revive Old Post”. I set it to randomly send out a previous post of mine every 16-24 hours.

Let’s end at a similar place from where we began. Just like you need to be selective with which social media platforms you spend time on, you also need to be selective with how much time you spend on social media. Don’t forget about your writing because you’re working so hard to get people engaged with your writing. Manage your time and stay focused on the craft. After all, what’s the point of having an author social media following if you’re no longer writing? 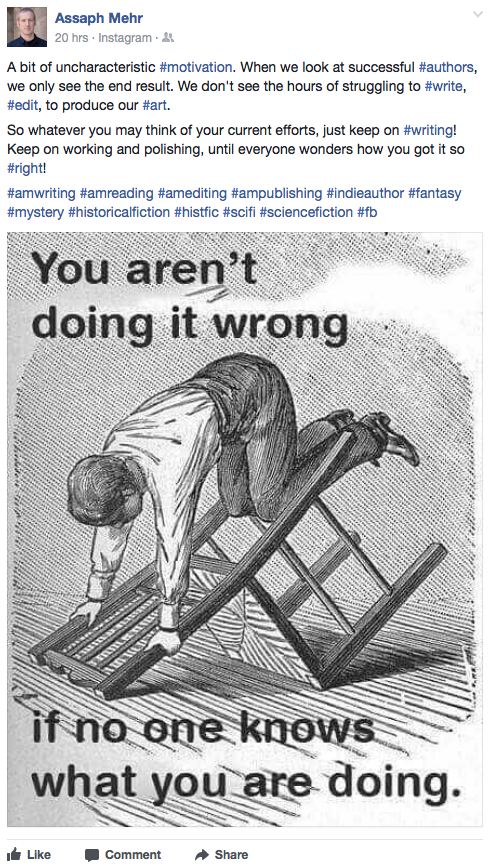